Hey there viewers! From PM Narendra Modi congratulating the superstar Chiranjeevi for bagging the film personality of the year award at the 53rd edition of IFFI to the makers unveiling the thrilling trailer for the Amala Paul starrer ‘The Teacher’, here are some of the hot news of the day from the south film industry. 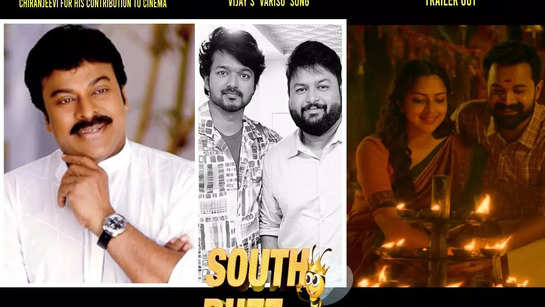 Superstar Chiranjeevi has been honoured with the Indian Film Personality of the year award at the 53rd edition of the International Film Festival of India in Goa. Prime Minister Narendra Modi was all in praise for the ‘Godfather’ actor as he tweeted that Chiranjeevi Garu is remarkable and his rich works, diverse roles, and wonderful nature have endeared him to film lovers across generations.

Makers recently wrapped up the shoot for the last song from Vijay’s ‘Varisu’ which is choreographed by Jani master. Reportedly the makers have spent Rs 7 crores to film the song sequence.

Coming to the Malayalam film industry, an intriguing trailer for Amala Paul’s upcoming film ‘The Teacher’ was unveiled by the makers on the last day. The film is directed by Vivek and the trailer promises a nail-biting suspense thriller.

So that’s all for today folks. Stay tuned as your south bee will be back the next day with more latest updates from the south film industry. Till then bye.

TikTok Sued By US State Of Indiana Over Child Safety, Security Fears