Art director Rajeev Nair: There is a good scope for new talent in the art department – #BehindTheCamera | Telugu Movie News

Rajeev Nair is a popular art director and production designer who is spearheading creative thinking and innovation within the industry. He draws on his years of experience in producing unique imagery and production design, allowing him to push boundaries while ensuring commercially successful outcomes. Having worked in over 80 films, Rajeev is one of the strongest pillars of films like ‘Gamyam’, ‘Vedam’, ‘Prasthanam’, ‘Gunde Jaari Gallanthayyinde’, ‘Naa Bangaaru Talli’, ‘Fidaa’ and to name a few. During an exclusive interaction with Rajeev Nair, he elaborates on his work process, discusses his ideas about designing from a director-centric and more. 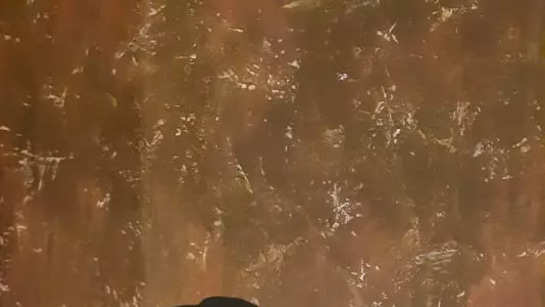 Excerpt from the interview:

Rajiv reveals his educational background and admits, ”I was born in Angadipuram, Kerala. It has been 20 years since I came to Hyderabad. I have settled here since then. After finishing my bachelor’s degree in Kerala, I went to Kolkata to study bachelor of visual arts at Ravindra Bharathi University. I received a post-graduation degree from Visva-Bharati University, Kolkata. I started folklore research with the help of the National scholarship programme at the same time. After that, I came to Hyderabad to pursue Diploma in television production at the Hyderabad Central University.”

”After completing my post-graduation, I started teaching at institutions and colleges. One fine day, I got an opportunity in Ramoji Film City as a props master. That was a turning point in my career. I worked for nearly five films in Hollywood production with international people,” he says. 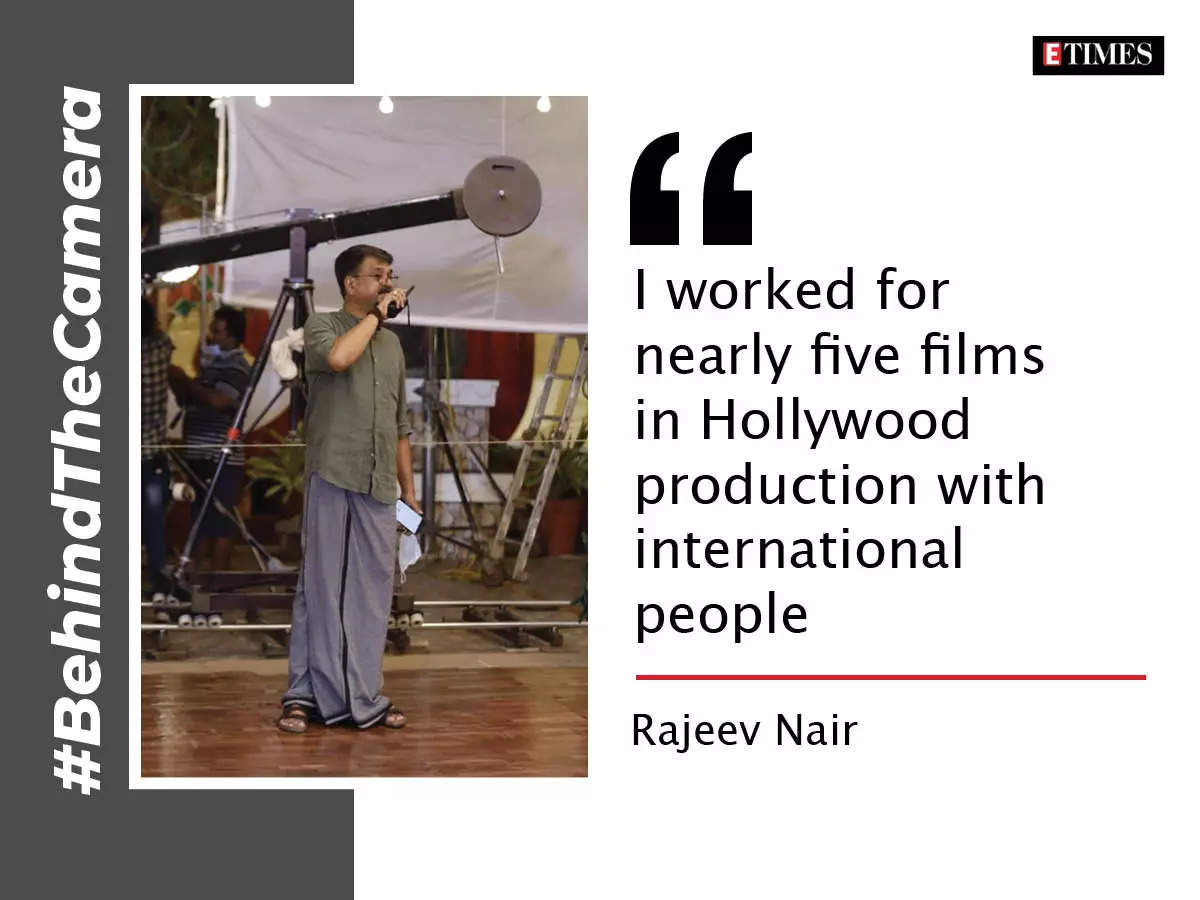 ”I got a chance to join the team of popular art director Ashok Kumar for the Mahesh Babu-starrer Okkadu. Actually, that was my entry into the Telugu film industry. I worked as an associate art director for the film under the supervision of Ashok garu. That was a great experience. I was poor at speaking Telugu during my initial days. I learned a lot from Ashok and his team, especially the basic things we needed for the production design,” reveals how he learned Telugu.

”I can speak Telugu fluently now. The people who are working with me are all Telugu guys. So, with their help, I started learning the culture as well as the language. That was a long process. But I enjoyed it while learning. These are also part of my observations,” he adds.

Recalling the first film, he worked on, Rajiv says, ”My first film as an independent art director is Vana, which is a remake of the Kannada hit film Mungaru Male. MS Raju garu made his directorial debut with this film. After this film, my association with MS Raju garu continued to make several hit films. From ‘Okkadu’ to ‘Arundhati’, I worked with Ashok Kumar. I was supposed to work for ‘Arundhati’ as an associate, but due to a delay in the shooting schedule, I couldn’t adjust my dates to the film and left the project.”

For those who don’t know, what an art director does, he explains, ”When a director narrates a story, we imagine everything he says because we design the background and all as per the story requirements. Be it an outdoor location, a huge set, or a background colour, and pattern, we have to enhance the whole thing visually. Whatever we see in the backdrop of a scene in a film will be taken care of by an art director. It’s quite challenging and it’s going to take us some time.” 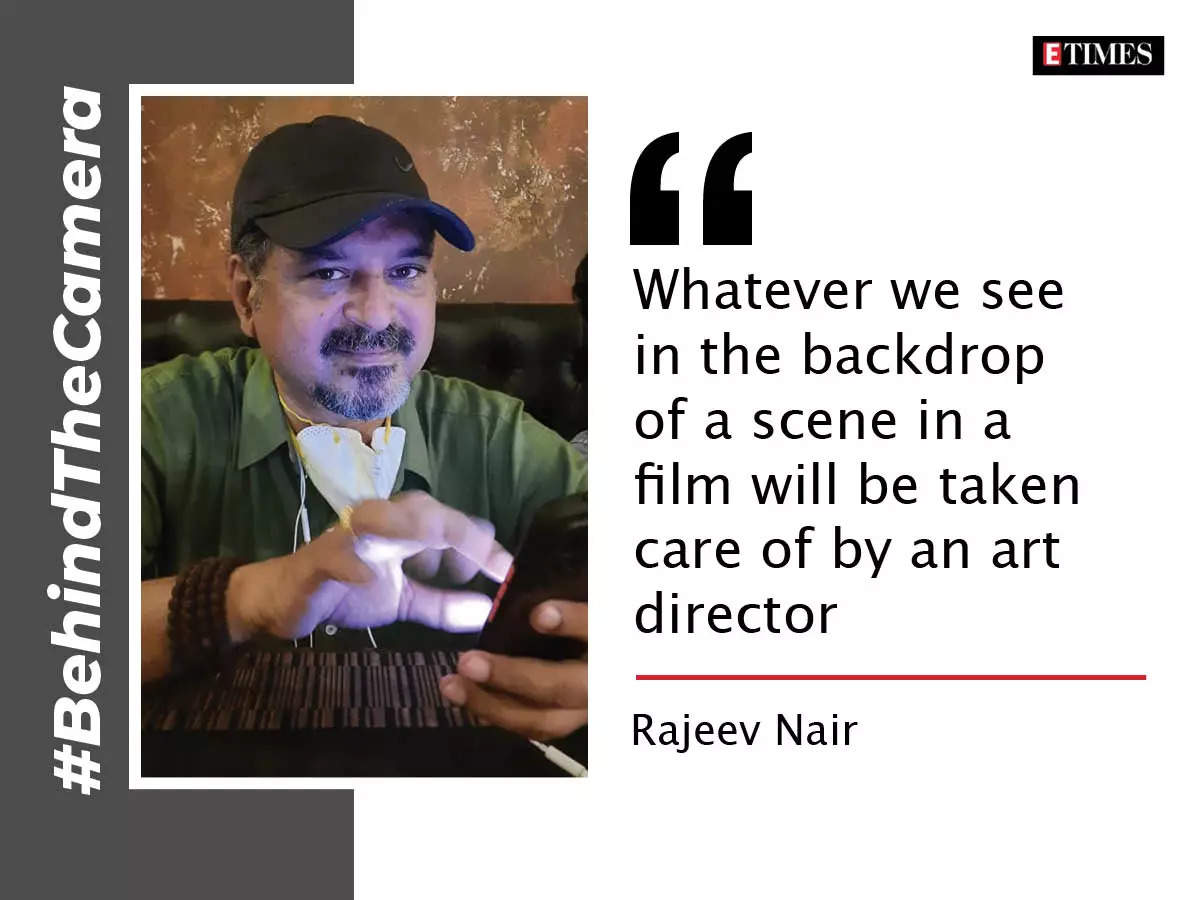 ”After ‘Baahubali’, I can say most people are aware of what art direction is. We need the feel for a better way of storytelling. Because of the advancements in technology, people get to know what is behind filmmaking and all. The cameraman and art director are both hands for a director. We both travel with the director throughout the shoot,” Rajiv reasoned. 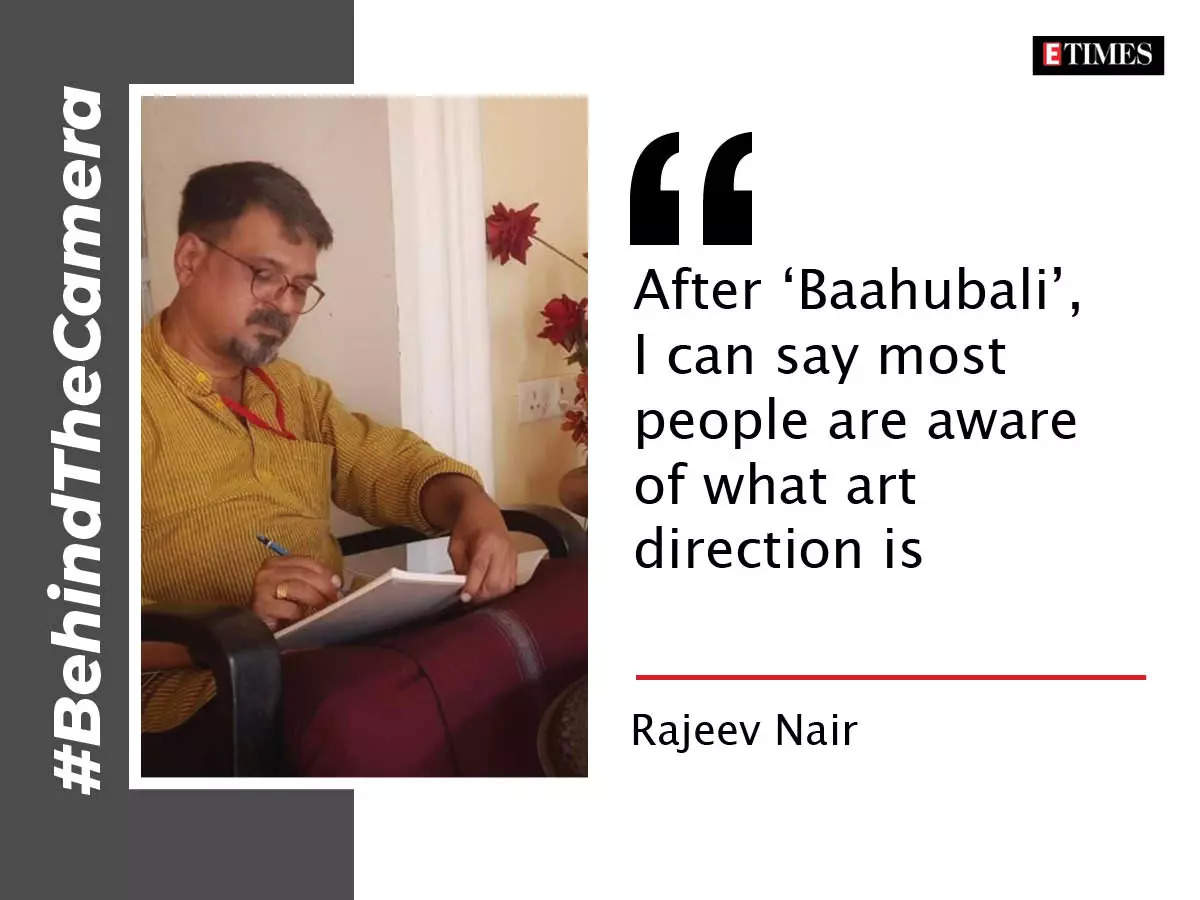 With no complaints, the director is happy where he stands today. ”I am happy with what I am today. As an independent art director, I did nearly 80 films and have been enjoying my journey. Being the art director, we give a different feel to each film and we love it. According to a story, an art director should do research and I do so. And I enjoy the creative process of art. It has a lot of importance in filmmaking. In fact, I always try to learn something that I do.” Speaking about his direction plans, Rajiv said, ”There are several art directors who turned into filmmakers and did some superhit films. We and directors share thoughts with each other during pre-production work. We also contribute something to a film. So, we can also direct a film and I have plans, but not now. I don’t know when it will happen. But I believe the day will come for sure. So, I will be waiting for the time. Meanwhile, I enjoy working in the art department.”

He feels every film will be challenging and it gives him a chance to become something better. He opines, ”For me, every movie is challenging. There were big-budget movies as well as shoe-string budgets movies I worked for. According to the budget and genre, the style would be different. Each director has a different way of storytelling and I have to follow their style. Approaches and aesthetics will be changed depending on the genre, budget, director and all. So, all my movies are highly challenging.” 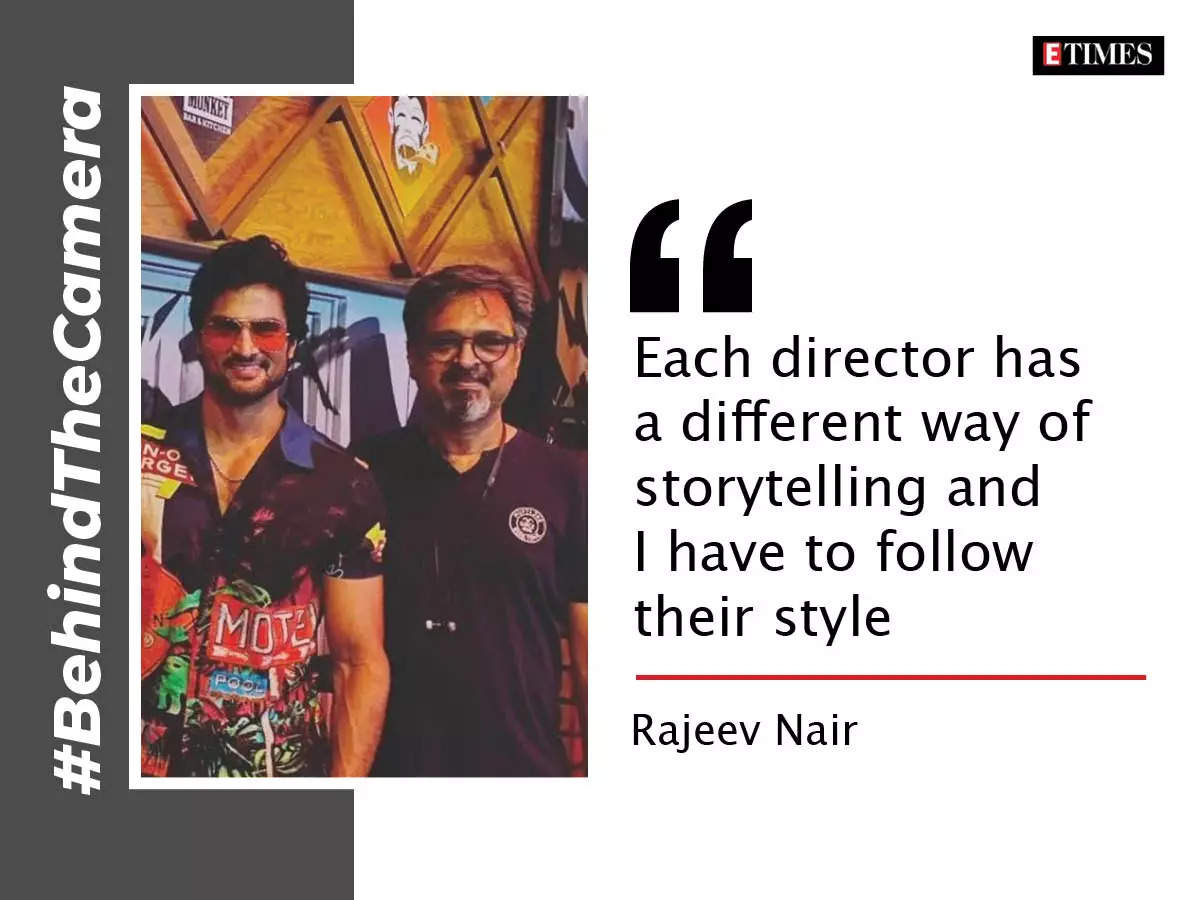 He puts more light on the working process and states, ”Creating art for each film is not the same. It depends on the genre. For instance, if it is a period drama set in the past, we have to create such an atmosphere as per the story. Then only people sense the reality of the setting and all. But it’s quite a challenging task. Simply, we have to create hell and heaven at a time. We will be criticised ruthlessly if anyone finds any mistake in the set. That’s why we are very careful at what we do.”

Revealing an interesting detail about art direction, he further adds, ”Nowadays we can insure the sets too. Producers spend a huge amount on films so they do insurance before the film goes on the floors. It is a risky process to erect film sets. So, film workers will be insured and they will get benefited. The production house will take care of the insurance process.”

Giving a piece of advice to pursue a career in art direction, he guides, ”There are plenty of opportunities for art directors in the Telugu film industry. If you have talent, you will have a very good place here in Tollywood. All you need is a creative bent of mind, flexible mindset, research capability, reasoning ability, positive attitude and willingness to work in a team environment. You have to work with different kinds of people once you are in. You should be supportive of the director and cameraman while filmmaking. So, there is a good scope for new talent in art direction and Tollywood always welcomes such creative persons.”

”There are five movies ready for release. A Hindi film called ‘Music School’ is gearing up for release soon. I recently finished working for director V Jayashankarr’s ‘Ari.’ Sampath Nandi’s production venture ‘Simba: The Forest Man’ is in post-production and will hit the screens next month. The release date is not yet confirmed for the film ‘W5’. I am currently working on Sudheer Babu-starrer ‘Mama Mascheendra’, directed by Harshavardhan,” he signs off with a smile.

Who Is Aarya Walvekar? Winner Of Miss India USA 2022